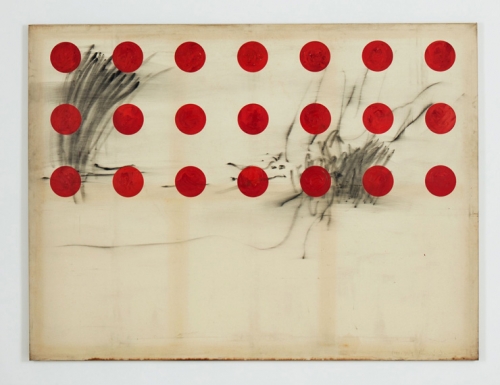 By Kwon Mee-yoo
Two established Korean artists, Kim Yong-ik and Chun Kwang-young, are holding solo exhibitions overseas, showcasing contemporary Korean art rooted in the nation's turbulent modern history. Kim's works are on view at the Tina Kim Gallery in New York's Chelsea neighborhood. This is the artist's first solo exhibit in the United States as Kim mainly worked domestically in the past.

Kim maintained an indepenadent stance amid Korea's eventful art scene as it transitioned from modernism in the 1970s to conceptual art and Minjung art (political and populist art movement) in the '80s. Instead of following the trend, Kim explored the fundamentals of art, questioning the relationship between the avant-garde and society.

The New York exhibit centers on three major periods _ his Plane Object series of fabric works from the '70s, his geometric compositions from the '80s and his dot paintings from the '90s. As an artist Kim continuously challenges himself and he reappraised his signature dot paintings he made in the 2000s...